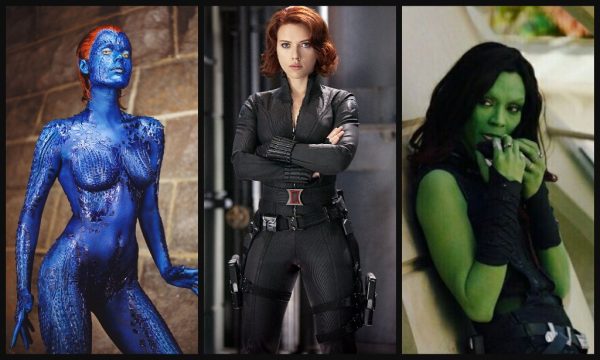 We started Rogue Matter in response to closed universes like Marvel. We WANT you to create fan fiction based on our stories! We WANT you to have a say in what happens to them! We WELCOME you to submit your original content! Nothing against the 800-pound gorillas, (we still love ’em!), but we can’t talk comics without first letting you know where we stand. ????

So since we’re feeling cheeky, our editorial team decided to put together a list of our top 25 favorite Marvel movies! You might disagree, and that’s ok! The point of Rogue Matter is to have different points of view! Welcome to Rogue Matter, where we’re dedicated to the rebel spirit!

Also check out our favorite DC movies too!

Screw villains, Howard the Duck is the creepiest Marvel character around.

The Wolverine heads to Japan to face his inner demons. Critics praised the film for being true to the comics.

“If you wanna survive it, you better learn to pull the trigger!”

Rebecca Romijn’s debut as Mystique was enough to win over the critics.

Iron Man 2 was a bit played out after the first film, but it was still loads of fun.

The saving grace of Thor: The Dark World was the addition of more Loki.

Despite some hodge-podge over Ben Kingsley getting cast as the Mandarin, Iron Man 3 was a box office success.

As doofy as a blonde hammer-wielding hero could be, Chris Hemsworth brought heart and zest to the god of thunder.

It doesn’t get much more American than a man in a spangled outfit facing off against Nazis.

Old favorites met up with new stars–what could go wrong?

Scott Lang’s (Paul Rudd) sticky fingers come in handy when he must carry out a thieving mission. Oh, and we can’t forget Antony.

Critics and fans praised the well-executed plot and solid acting.

The second Avengers film was action-packed, fun and had some heartfelt touches.

Okay, so we didn’t realize this was a Marvel film until making this list. It’s pretty stinkin’ cute.

Deadpool was by far the raunchiest of the Marvel films so far, and we dig it.

Packed with action and a hefty dose of political reality, this movie became an instant hit with fans. Not to mention, the Winter Soldier himself is pretty bad-ass.

It’s got killer tunes and quite possibly the weirdest characters ever, but somehow it works.

This movie was practically a better Avengers movie than Age of Ultron.

On a mission to collect six Infinity Stones, the Avengers come together to battle their most powerful enemy yet—Thanos.

Did you know that the cast did most of the stunt work that you see in the movie?